What a Great Week for Extreme Aviation!

LiveAirshowTV was on the field at the Reno Air Races, with daily recaps, as well as an interview with Unlimited racer Dr. Brent Hisey; owner/pilot of the P-51 Mustang “Miss America”. As you may have seen, Brent had a blown engine on the third lap of the Unlimited Gold race on Sunday but was able to make it down safely.  Race No. 8, “Dreadnaught” took the gold again this year. 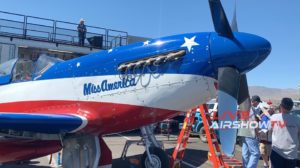 Our other focus was on the National Aviation Heritage Invitational, one of the most prestigious aircraft restoration competitions in the world. What began at Reno 20 years ago, saw 22 planes compete for the Neil A. Armstrong Aviation Heritage Trophy. Nearly half of the aircraft were first time entries! These owners and restorers spend countless hours restoring these planes to what they looked like the day they rolled off the factory floor. The 1931 Waco QCF was the Grand Champion as well as the Air & Space Smithsonian Magazines People’s Choice Award winner. See photos of all the winners on our social media pages.

The biggest “buzz” on the ramp was the STOL Drag Racing event! These pilots have to be both fast AND slow on a short course that is similar to what they would find when flying in the “back country”. We included some of those races in our reports, but we will have much more soon.

There is still a couple of months left in the air show season. Remember every Thursday morning we post the details of who’s flying where the following weekend. Check our Facebook page for those details.

We will work with Rob Reider for recaps from Oceana, Miramar, Jacksonville Beach, Punta Gorda and Pensacola. Ken Hildebrandt will wrap up his season at Wings Over the Wine Country in Santa Rosa, CA.

The new season of “Logbook” kicks off at the end of this week with a 5-part series featuring Jessy Panzer. Jessy is now flying a formation routine with Sean D. Tucker. Learn more about Jessy’s background and what she loves most about flying!

The jet teams wrap up their seasons in November.  The Blue Angels Homecoming in Pensacola is November 8-9, and the USAF Thunderbirds finish up at Aviation Nation, Nellis AFB in Las Vegas, NV on November 15th-16th.

Stay with us throughout the end of the air show season, through the ICAS convention, and the long cold off-season! We’ll keep air show action coming your way!