(LAS VEGAS, NV – DECEMBER 6, 2017) LiveAirShowTV was presented with a 2017 Platinum Pinnacle Award at the annual convention for the International Council of Airshows (ICAS). The Pinnacle Awards recognize innovation and excellence in the air show industry in seven categories including Support Services, for which LiveAirShowTV won. The company was recognized for its innovations in air show broadcasting, including social media integration, on-screen graphics, performer “green-screen” introductions, sponsor fulfillment, and internet distribution. 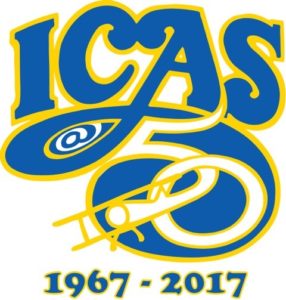 “We have been pushing the boundaries for many years in our coverage of air shows,” said LiveAirShowTV president Jeff Lee, “but this year we made a quantum leap in both coordination with show operations and quality of the broadcast elements. The result was better experiences for fans on site, as well as for the audience watching online from around the world”.

LiveAirShowTV broke many air show records during the year. Over 100,000 views were recorded from over 120 countries for the Selfridge Open House and 100th Anniversary Air Show, with a social media reach of over 1.2 million. That record was then eclipsed in November at the Nellis Air Force Base Aviation Nation 2017 Air & Space Expo with over 400,000 views. “We know from the millions that attend these events annually that there’s also demand to watch them via broadcast.” said Phillip Hurst, LiveAirShowTV’s General Manager. “We’re glad we can now serve these fans with the production quality these awesome air shows deserve.”

In addition to having four confirmed 2018 air shows with planned production coming into the ICAS annual convention, at least 16 other shows have actively engaged LiveAirShowTV to discuss making live production assets a part of their event. Official event production dates will be announced in January and as they are finalized.

About International Council of Air Shows: ICAS was founded in 1967 as a trade and professional association by industry professionals to protect and promote their interests in the growing North American air show marketplace. It promotes standardization of industry practices in key areas such as safety and business practices.

About LiveAirShowTV: LiveAirShowTV is the only company in North America that specializes in the live television production of air shows. It has produced over 100 air show broadcasts, creating thousands of hours of programming seen by millions on site at air shows with video walls, on internet, and television.