(RED OAK TX – October 5, 2020) In the very strange 2020 COVID world, LiveAirshowTV continues to break new ground and keeps airshows and aviation in front of fans around the world.

First, LiveAirShowTV once again brought broadcast innovation to the air show industry with NAS Oceana Air Show 2020. While there were no fans on the ramp, a full air show took place on September 19th and was broadcast digitally to a global audience.  The telecast featured live military flight demonstrations interspersed with segments telling stories around the Navy, the local Virginia Beach area and VFA-106 based at Oceana, the largest F/A-18 base in the world. To add more variety to the show, LiveAirShowTV brought in aerobatic civilian performers Michael Goulian, Scott Francis and Team. Working directly with air show director Richard “Corky” Erie, and air boss CMDR Edward Chandler, LiveAirshowTV producers built a custom air show and live set hosted by Rob Reider and Steph Stricklen.  “While we regretted having to keep the base closed to the public due to the pandemic, we built a schedule for a TV audience that allowed us a unique way to present flying performances, highlight our mission at NAS Oceana, and tell the Naval Aviation story,” said Erie. 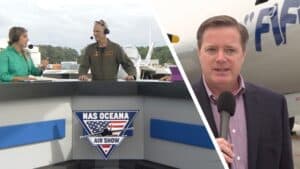 social media platforms including the base, the U.S. Navy and LiveAirshowTV, quickly accumulating over 300,000 views across 50 countries. “We can see this as a new paradigm for a wide-ranging number of airshows across the country that wish to extend reach beyond their local and regional markets.” said LiveAirShowTV president Jeff Lee.

The following week, LiveAirshowTV travelled to Washington D.C. to cover the Arsenal of Democracy 75thanniversary flyover of the National Mall and worked closely with the organizations presenting that event: The International Council of Air Shows, Commemorative Air Force, General Aviation Manufacturers Association, and the National Air Traffic Controllers Association.  The mission was to tell the story of the industrial manufacturing effort for World War II, dubbed the “Arsenal of Democracy” by president Franklin D. Roosevelt. The aircraft were staged for the flyover at regional airports, however non-VFR conditions prevented the flights. A backup was set for the following day, but once again weather was a no-go. LiveAirshowTV and ICAS then developed a creative solution to save the intended broadcast. Host Rob Reider was placed on top of the National Museum of African American History and Culture – which graciously allowed the broadcast to originate on their premises – and narrated the aircraft flight segments to footage of the aircraft shot days before during practice flights. The broadcast also featured a “preamble” section hosted by Matt Jolley with special footage provided by the Boeing Co. After the broadcast ICAS president John Cudahy said, “When we ran into some weather complications, LiveAirShowTV worked closely with us to produce alternative programming that helped make the event successful despite the cancellation of the flyover itself.”

The archive for NAS Oceana can be seen here.

The archive for the Arsenal of Democracy event can be seen here.