The four livestream telecasts from the 2021 SUN ‘n FUN Aerospace Expo shattered records for online air show views and impressions.  The LiveAirshowTV-produced telecasts were distributed April 15-18 over its own social media platforms as well as those of SUN ‘n FUN and several affiliated partners, including the local market NBC affiliate, WFLA.

The initial live replay views over two weeks totaled over 640,000.  With the addition of the WFLA’s rebroadcast - which included a viral video featuring Saturday’s Blue Angels performance - the total views exceeded 2.3 million.  This exceeds LiveAirshowTV’s previous record for views of a multi-day event, held by the 2017 Aviation Nation livestreams.

Impressions of the video posts from which the views came were equally impressive, with 2.6 million and an estimated 6.6 million including WFLA.  This too is an all-time high for LiveAirshowTV social media impressions delivered for a multi-day air show, surpassing the Selfridge ANG 100th Anniversary air show. 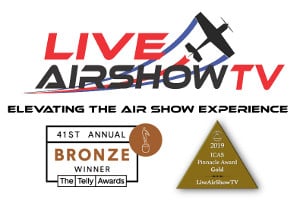 “We are very excited to continue raising the bar in terms of quality and reach of our air show broadcasts,” said LiveAirshowTV president Jeff Lee. “We strive to deliver value to partners such as SUN ‘n FUN and the Aerospace Center for Excellence, leveraging our distribution and storytelling expertise to help them achieve success.”

“Our partnership with Live Airshow TV has really changed the marketing and deliverables game for SUN ‘n FUN and the Aerospace Center for Excellence,” said Greg Gibson, Chief Marketing Officer and Airshow Director. “With this amazing reach, we have had our messaging distributed to the most massive audience in our history, and our sponsors have had their brands showcased in a way that is truly groundbreaking for the airshow industry.”

As it has done in the past, LiveAirshowTV conducted a survey along to accompany its coverage of SUN ‘n FUN 2021, revealing several important points.  First, supporting the findings from livestreaming of other event types, air show ticket sales are increased due to awareness and excitement generated.  Second, over 30% of viewers are active aviation participants, and two-thirds of the remainder say they’re interested in becoming a pilot or involved in aviation.  Finally, viewers would watch livestreamed air shows often if they were available – another plus for LiveAirshowTV’s growing coverage of the industry’s most successful events.